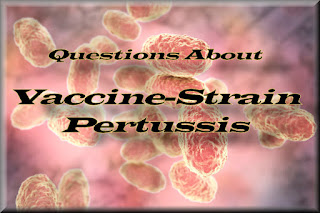 It’s being said that this cannot happen. That this has been on the market since the nineties. But that statement assumes change does not happen. I assert that it does. Something has changed in the last several years to make this a virulent process.

I am just recovering from my third bout of pertussis in as many years.  I’m 67 and I never remember having pertussis in earlier years.  It is quite a distinctive illness, so I have no doubts.
I recall recently hearing about the pertussis outbreak amongst students where only the vaccinated experienced the illness.  Their unvaccinated peers did not suffer the illness.  I think there is a reason for that.

In 2016, I asked for a tetanus booster.  I had to kick and fight to get it.  I wish I hadn’t.  A friend of mine came over to visit one day in 2017—don’t remember exactly when, but I could look it up if I had to.  He had had his tetanus booster.  He sat in a chair about four feet away from my bed.  I had been getting sicker and sicker so I lay in my bed.

He left after about a half-hour—within a week, I was hacking my brains out with something I had never experienced before.  I went to the doctor and no tests were done, but my oxygen was low—about 92%.  I made it clear I did not want to go into the hospital and I didn’t.
My friend, Bert, was as stymied as I was—I was sure he was the source of my illness.  I barely went out; my kidneys were close to failing and my body was often wracked with spasms.  He told me he was just as confused as I was because both I and his wife had gotten this mysterious illness yet he had not.

Fast-forward through my next bout of this illness  (which was last October) to now.  With a few caveats.

This case of pertussis I am just finishing up was the result of occupying the same space as my mechanic.  After paying my bill, he informed me he had received his tetanus booster a week earlier.  I groaned and told him he more than likely had received the Tdap, and that he would now be susceptible to pertussis for the rest of his life.  What didn’t hit me until the drive home was that I was going to get sick, and I did.  I kept hoping I wouldn’t, but with the onset of glandular pain, I knew I was probably in for it.

I’ve now experienced three events.  All three events occurred as the result of contact with someone having a shot laced with an acellular pertussis component.

Questions:
And then I found this:

Acellular pertussis vaccines protect against disease but fail to prevent infection and transmission in a nonhuman primate model
https://www.pnas.org/content/pnas/111/2/787.full.pdf
at October 16, 2019

Hanging off the Vaccine Cliff

Hanging off the Vaccine Cliff “The Do No Harm Act clarifies that the Religious Freedom Restoration Act is intended to protect reli...